The Best Flowering Trees Near Paved Areas at Your Commercial Property

The delicate blossoms. The intoxicating fragrance. The fluffy pastel canopy.

You just want to get close to them.

That’s why these beauties are a great choice for along sidewalks, next to steps, and near patios and seating areas at your commercial property.

But not all flowering trees work well in paved areas.

Pamela Whitley, Director of Horticulture and Outreach for Michael Hatcher & Associates, shares a few of her favorites.

“The one thing people are concerned about with flowering trees is debris,” Whitley says.

“Flowering trees drop petals, and some drop seed pods,” she says. “Some people think it’s delightful, others think it’s messy. You have to take the bad with the good.

“You have to understand that’s part of the life cycle of the tree,” she says. “Things will drop.”

Whitley has a lot to say about this popular beauty.

“People love the color,” she says. “They’re still blooming in the heat of the summer, unlike a lot of flowering trees that only bloom in spring.” 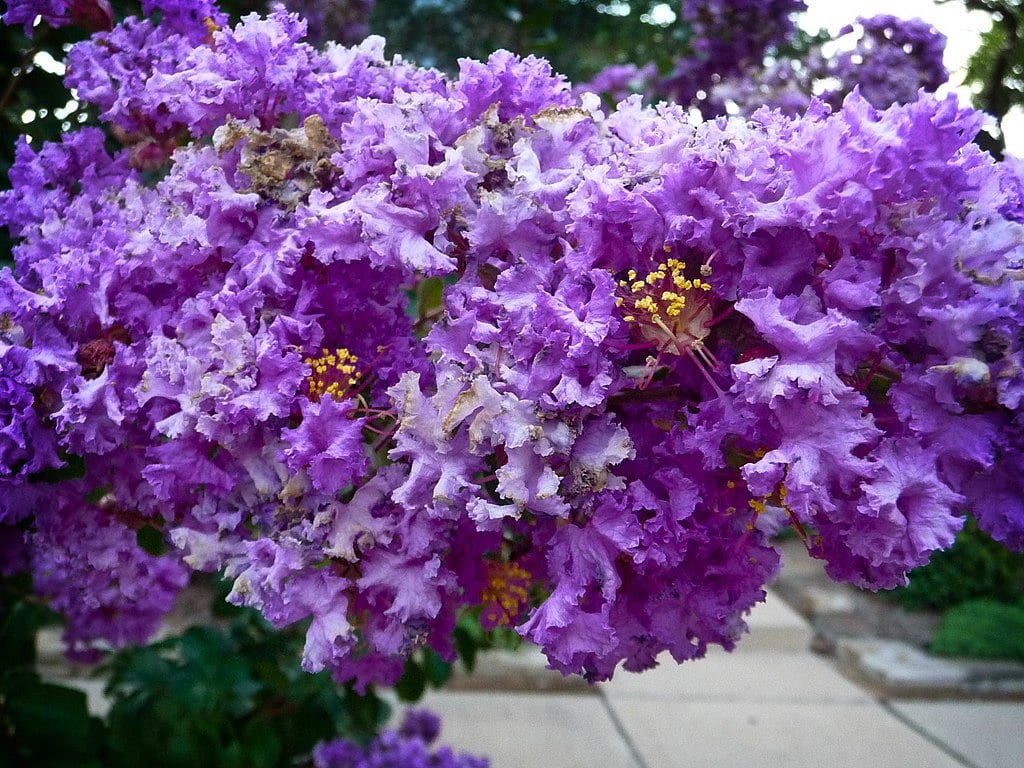 “They’re gorgeous in their dormant season, too,” Whitley says. “They have that exfoliating bark, like the color of giraffe skin.”

Don’t be fooled by the delicate flowers.

“They can take serious neglect,” she says. “You can cut them back and they still resiliently bloom next year.”

Two things to note: they drop seed pods and they need to be treated for bark scale, a damaging insect that leaves a black, sooty mold on the tree bark.

While evergreen magnolias get too large for near paved areas, Whitley says, the smaller deciduous varieties are a great choice. 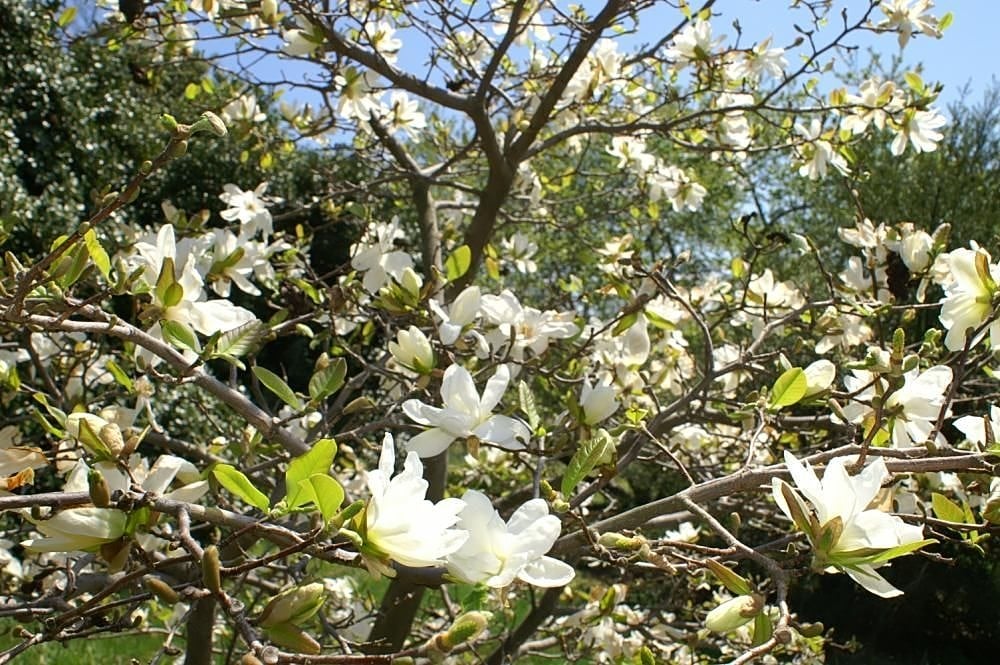 Expect early spring blooms in pink, purple, white, or yellow, depending on the variety.

Get expert advice on what variety is best and won’t get too big, she suggests.

“People see them when they’re small and forget they’ll get bigger,” she says. “People often plant them too close to their house. Then they get into the gutters and into the roofline.

“You don’t want to have to trim a beautiful magnolia tree down into a bush.”

A small ornamental tree with a pretty, rounded canopy, it tops out at 25 feet, so it’s not too overwhelming for near paved areas. 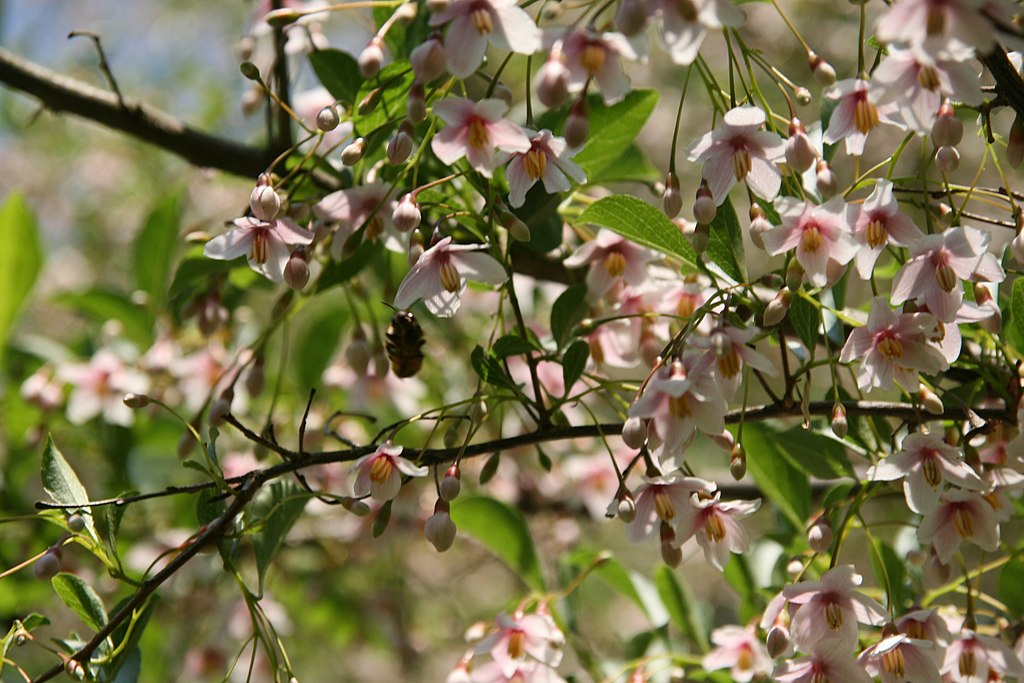 “It has pretty little white flowers in early spring,” Whitley says. It’s called “snowbell,” because of its pendulous clusters of white, fragrant, bell-shaped flowers that bloom in May and June.

“People love to see the cherries bloom in spring,” Whitley says. “It means spring is coming.”

Delicate and romantic, they’re reliable bloomers and don’t get too big, she says. 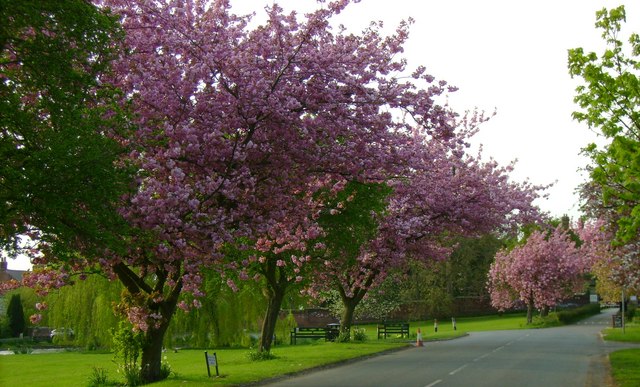 One thing to note: these trees don’t have the longest lifespan.

“Eventually you might see some disease at maturity,” she says.

Don’t plant a cherry tree too close to walkways, she advises.

“The canopy can be low, so be mindful of its mature height,” Whitley says. “You don’t want to be walking into it.”

The entire family of Viburnum, from shrubs to small trees, are good bets for near paved areas, Whitley says. 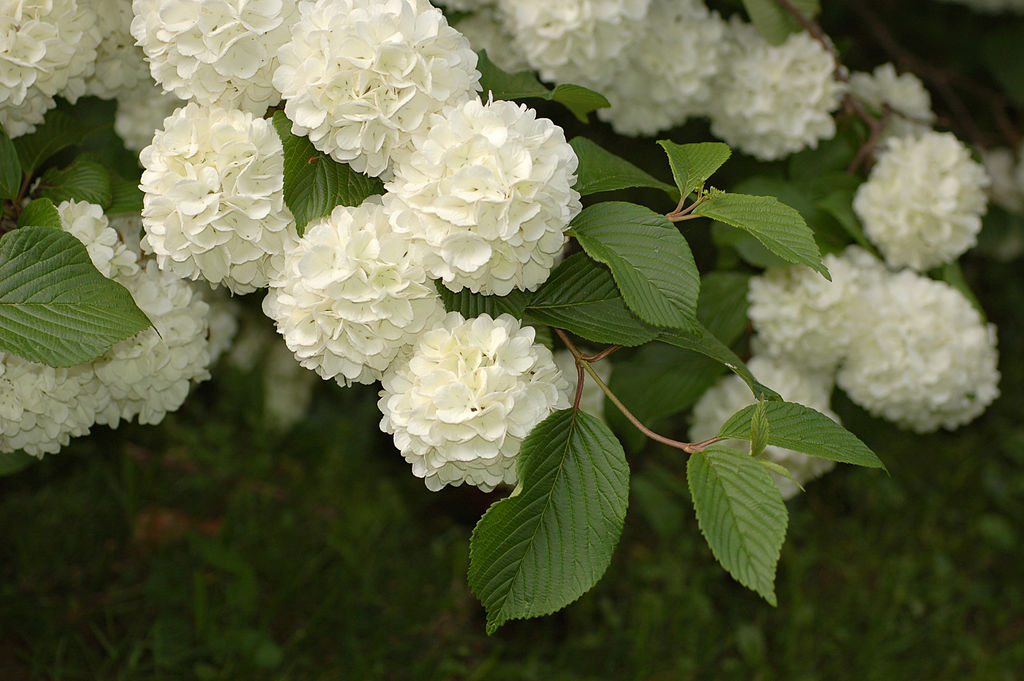 She loves the snowball viburnum. The name tells you a lot.

“It has big white pom pom blooms,” she says. “It’s gorgeous when it blooms.” 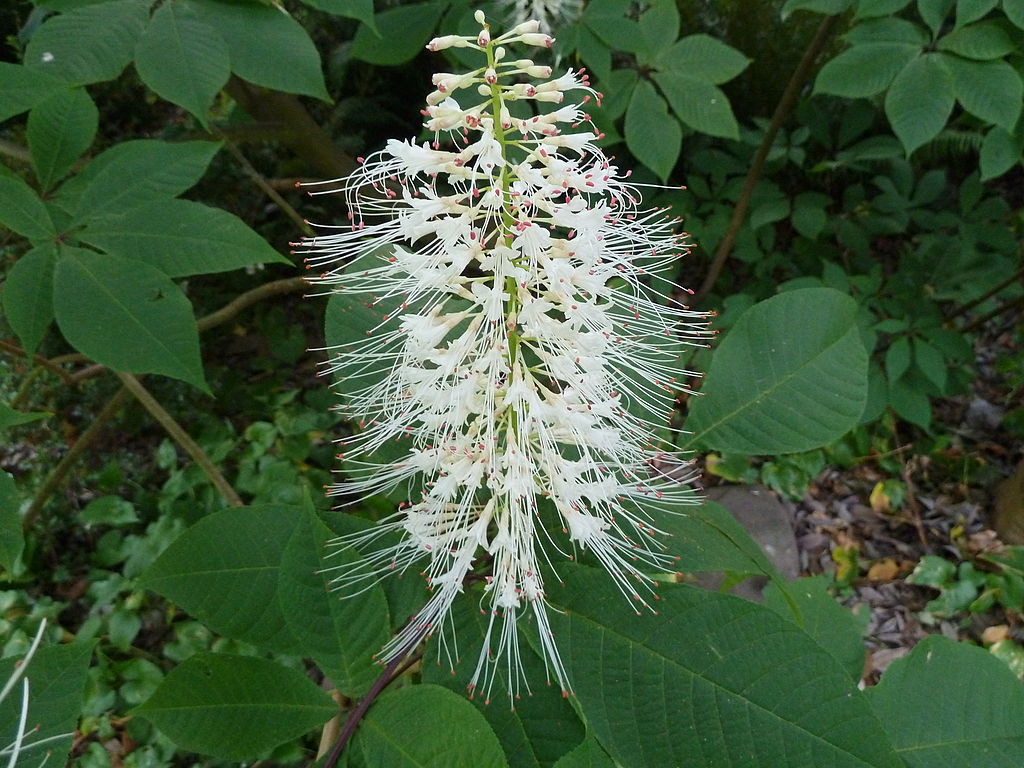 Pollinators and hummingbirds love the blooms, she says, so you get a visual bonus.

Unlike most flowering trees that crave full sun, this prefers a bit of shade.

While it’s tempting to plant stunning flowering trees near sidewalks, patios, and steps for up-close oohing and ahhing, be wary of planting these beauties if there’s a lot of pavement.

Tree roots need room to spread and get nourishment from the soil. Too much pavement poses problems.

“Roots can come to the surface if there’s a lot of pavement,” Whitley says.

The size of the tree canopy is a good indication of how far tree roots will spread, she says. Roots often spread two to three times the width of the canopy.

“Roots will fight for the space they need,” she says. “They can surface and that’s not always pretty.

“Be thoughtful of the tree,” Whitley says. “Even though you might want a flowering tree in a certain spot, maybe a shrub would be better suited there if it’s a tighter area.”

Be aware the tree might not reach maturity if the root space is too confined, she says. Consider saving the flowering tree for an area that has more surrounding turf.

Try a Japanese Maple if you have lots of pavement, Whitley suggests. They offer the beauty of delicate, intriguing foliage and do well in a more confined space.

Attract customers, residents, and tenants with the irresistible spectacle of flowering trees near your property’s walkways, steps and patios. 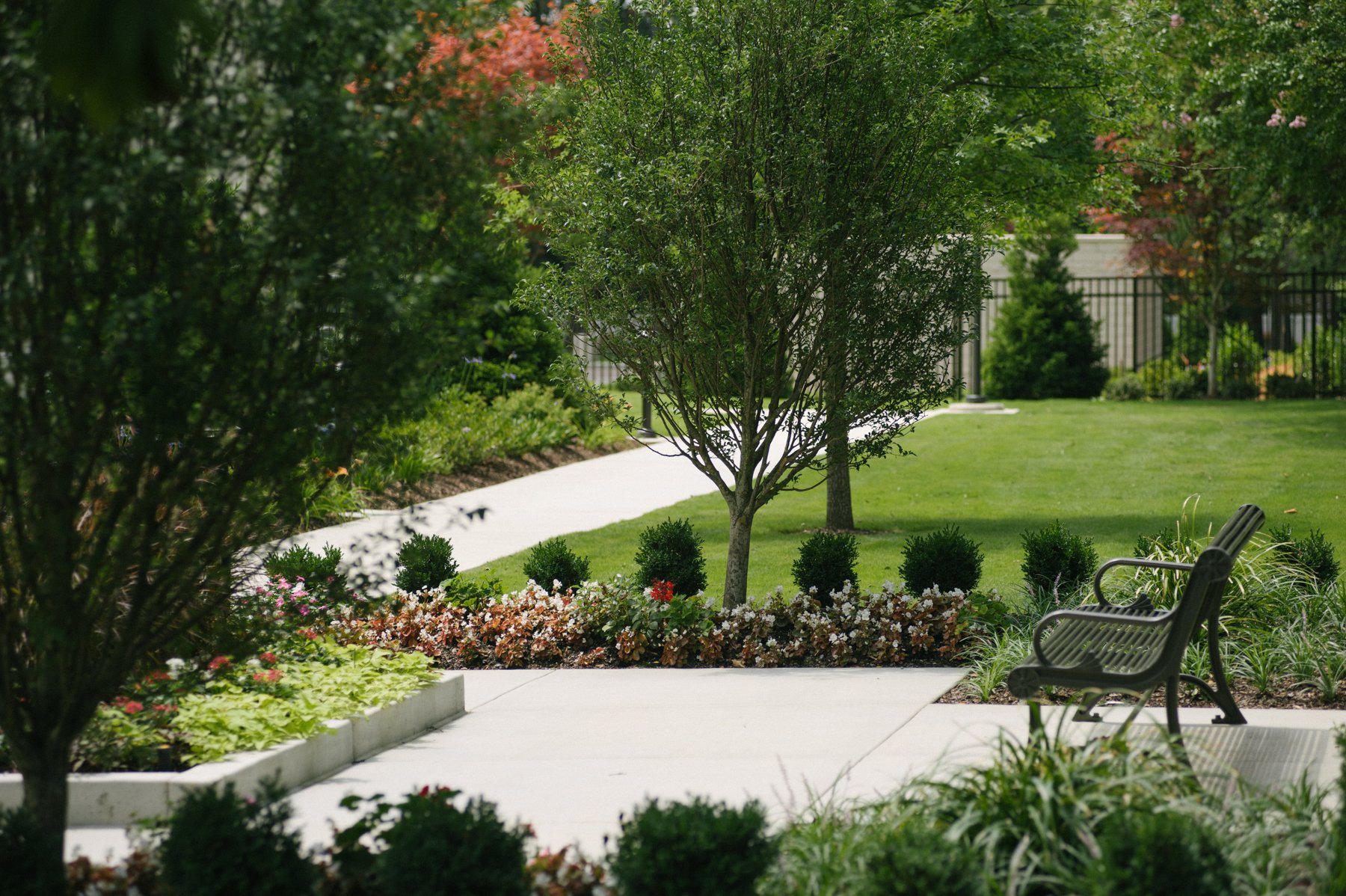 Everybody loves to get close enough to these beauties to admire their delicate flowers and inhale the intoxicating scent.

But be sure to plant trees that will thrive in paved areas. Not all do.

At Hatcher & Associates, we’ve had a lot of experiences with trees over the years. We’ll help you choose flowering trees that will be perfect for your property.

Are you ready to boost the appeal of your commercial property?

Talk to one of our commercial landscaping experts today! We’ll meet at your property, create a custom plan, and get you on your way to enjoying a beautiful, worry-free property.